The reality of school

Can you remember the excitement in the lead up to starting school? All the things to prepare for? 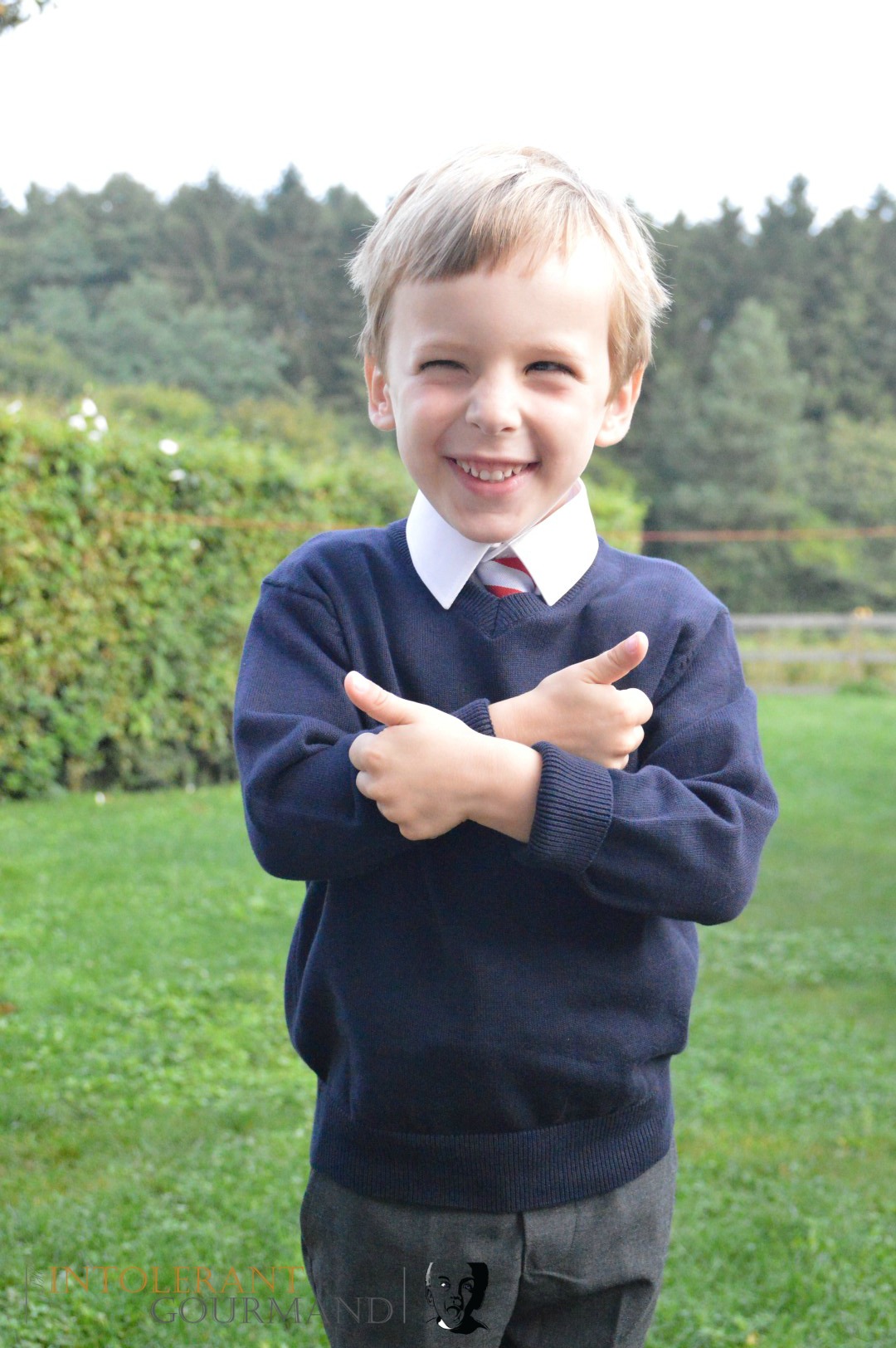 We've been working with Foods Matter on a series of articles on starting school with multiple severe allergies, and Callum's experiences. Here's our latest instalment! The original can be found here.

Can you remember the eager anticipation and those nerves bubbling up in your tummy? What about the new friends you will meet? What your classroom will look like? What you will play with first? What new adventures will be waiting for you?

And then there’s the first visit to the shoe shop for school shoes. The ones you’ve seen others buy, and you’ve wanted to be part of that group for so long! You know exactly which shoes you want as you've been secretly watching them since your sister went shoe shopping last year and you saw someone else try them on, but will mummy and daddy buy them?

If you plead just the right amount, and tug at the heart strings they just might!

What about choosing a new lunch box, and wondering what treats and yummy surprises might fill it?! We’ve picked up two lunch boxes to help keep cross contamination to an absolute minimum. The food is housed in a hard plastic box with lots of compartments (including one with a bottle for his dairy-free milk to go in), and then that box goes in a fabric lunch bag which helps to keep the contents cool, and also holds his water bottle. It helps to keep everything super safe, whilst still giving him the ‘standard’ packed lunch experience.

We’ve also had to buy an extra item, a new ‘medi bag’ to house his life saving medication. In true Callum style, instead of going for an understated option, he chose a bright and vibrant Despicable Me bag, because in his words it was ‘fun and not like a medicine bag’. Who was I to stop him? If this helps him deal with it, then I’m all for it! And the added bonus, if it is required, it’s going to be easy to spot!

If there’s one thing we can all agree on, the first day of school is a big deal for a little one! And it’s something that’s been repeated in households across the country over the past 2 weeks. Social media has been full of adorable photos of little ones setting off in their slightly too big uniforms, struggling to carry school bags, and with a nervous but excited smile about their faces.

We experienced this journey with our eldest, just 4 years ago, and now Callum has experienced it too.

But, his experience to get to this point has been a little different to others!

It’s not been a simple case of filling out an admission form and then waiting to see what school he is allocated to.

With the added complication of managing 28 allergies, we’ve had our work cut out to get to this stage.

We’ve had to keep our concerns under wraps as much as possible, so that Callum remains excited by this new chapter in his journey. It’s one that we’ve been very worried about, but needs to happen to allow him to live as full a life as he possibly can.

Callum has enjoyed every single moment of preparing for this huge change. Almost every person he sees is regaled with tales of what we’ve bought, his ‘big boy’ uniform and that he’s now going to ‘big school’.

It’s endearing to hear, and reassuring that thus far, the mental side of dealing with severe allergies and the accompanying difficulties doesn’t appear to have held him back. And if being honest, none of us would be surprised if he did find things somewhat overwhelming. He’s had a ridiculously tough time, and has experienced more than most.

He has commented a number of times about how he hopes his new friends will understand him, and that they won’t mind his eczema prone skin. Even at this young age, he is acutely aware that he is different to other children. Hopefully with the support we’ve shown him, and the gentle educating of the school, and his new peers with the letter we wrote on his behalf, this will help ease this somewhat daunting transition.

One of the things that has really helped Callum, is the knowledge that his best friend is starting at the same school as him. They went to the same childminder and have grown up together. She has been by his side since they were tiny not quite 2 year olds, and just ‘gets’ him. She understands when he’s feeling rubbish, knows what his triggers are, seen him during acute reaction episodes, and has looked out for him many times during their friendship!

Whilst they’ve not been together so much recently due to her attending pre-school while he stayed at the childminders, it became apparent very quickly when they met up during the summer holidays that they still have an exceptionally strong bond! He was beside himself to see her! And it was reciprocated!

She told Callum all about life in pre-school and what they were doing to get ready for ‘big school’. It really helped to put his mind at ease, and if anything, got him even more excited about experiencing this whole new world that he’d heard his big sister talk lots about.

It’s heart-warming to know that Callum will have such a good friend on his journey with him, someone that he trusts and adores completely, and that he can turn to from day one.

If there’s one thing I always say to clients and parents, it’s that allergies shouldn’t define you. Yes they teach you to not take anything for granted, as you literally don’t know what could be around the corner, but it shouldn’t stop you enjoying life.

It’s definitely life changing, but it doesn’t need to be life defining as Callum is constantly showing us!

For now, it’s time for Callum to lead himself into this new journey, and for us to take a step back and allow him time to grow and show everyone how amazing he is! 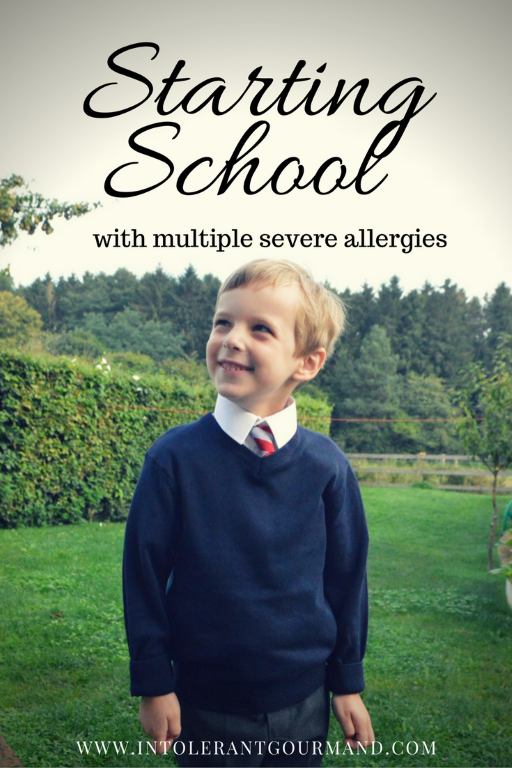 0 # Mummy Tries 2016-10-21 09:19
Such a lot of stress and worry hon, but completely worry it knowing how well your little man is doing. You've hit the nail on the head here by saying Call-in's allergies don't define him. This is exactly how I feel about Polly's autism xxx
Reply | Reply with quote | Quote | Report to administrator
0 # Intolerant Gourmand 2016-10-25 16:58
It's the best way to look at things isn't it, makes things seem less daunting! :) xx
Reply | Reply with quote | Quote | Report to administrator
0 # Mel 2016-10-24 21:56
Oh Nat, he's such a handsome little man! I'm glad it all went well for his start to school, and it's so "Callum' to choose a bright Minion bag as his new medical. Love this boy! It's also nice that he has a friend in school who really knows him well, understands him and who's there for him. Thank you so much for joining in with #FreeFromFridays xx
Reply | Reply with quote | Quote | Report to administrator
0 # Intolerant Gourmand 2016-10-25 17:00
I know I'm biased, but I agree, he's gorgeous! :)
The minion bag was totally him, so funny to watch him pick it out - there were plenty of other options, but he refused them all!
I'm so pleased his bestie is with him, it's made it all so much easier for him than it could have been! xx
Reply | Reply with quote | Quote | Report to administrator
Refresh comments list
RSS feed for comments to this post