More often than not, family pets tend to precede children in families. I'm sure the majority of us can relate! The cat or dog arrive soon after moving in with your partner/ boyfriend/ husband, and everyone starts commenting with the classic 'ahhh, pets always come before children' or 'getting the practice in of looking after something else before the babies start coming along' and so on!

When Jon and I bought our first house, nearly 9 years ago (lordy, that makes me feel old!!) we were given the most gorgeous little ball of fluff you could possibly imagine, as a house warming present from my brother and sister in law. At 7 weeks old, Cornflake, a beautiful ginger and white, long haired part Somali kitten joined our family and quickly made herself at home.

Fast forward 2 years, and Chloe made an appearance. As soon as she was old enough to appreciate Cornflake, she was besotted, crawling, then toddling and eventually running after her for cuddles. Initially, Cornflake wasn't impressed by all of this affection, but soon came to realise that befriending Chloe meant she'd get lots of treats - when Chloe didn't like eating something, she'd drop it for Cornflake to eat. After that, they became firm friends!

Then, along came little dude, and that's when everything changed, and some very difficult decisions had to be made.

It became apparent that one of Callum's many allergies, was clearly to cats. Until it was proven with the allergy testing, we took great care to make sure that Cornflake stayed well away from the key areas for Callum - banned from his room, kept away from where his car seat, toys and play mat were kept, and even where possible kept away from where Callum could catch up with her and give her cuddles. It was so incredibly hard, Callum absolutely adores her, one of his first words was 'Cornflake', but to keep him well and as comfortable as possible, we had to keep them apart. If we didn't, he would immediately have a flare up, and get red, angry looking skin where he'd touched her.

Upon confirmation of Callum's allergies, one of his consultants was adamant that we needed to 'get rid of the cat' to make him better. To say we were distraught is an understatement. Cornflake was part of our family long before the children came along. And yes, of course, priority goes to our wonderful children. BUT (and feel free to shoot me down if that's what you feel), Cornflake is family, and you don't just dump family when the going gets tough, sorry, but you don't! We would all be so upset if Cornflake wasn't around any more, it didn't bear thinking about!

It turns out, that even if we did get rid of Cornflake, the dander would remain in the house for up to a year, if not longer, so Callum's symptoms wouldn't improve until then anyway. So we'd be putting ourselves through heartache for nothing! In addition to that, I sought advice from one of Callum's many other consultants, and he was of the opinion that if we did remove Cornflake from the family home, there was a chance that Callum could become even more allergic. By having Cornflake in the house, it provided Callum with the chance of building up an immunity due to being around the allergen all the time. 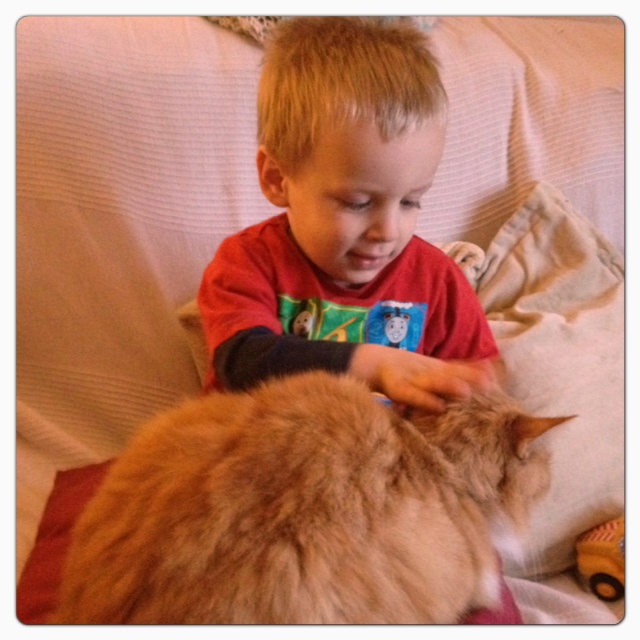 In the end, we decided that keeping Cornflake and giving Callum the chance to build up an immunity was the best possible option. Hand on heart, I am so so pleased that we did. Callum has not only built up an immunity, he has improved (with Cornflake only, it has to be said!) so much, he is now able to have Cornflake sit on his lap, and give her cuddles, and he has little or no reaction. I never in a million years thought we would ever get to this point!

Maybe, just maybe, there is hope for all his other allergies to improve over time! Never give up hope, you just never know!

Sent from my iPad