An enclosure featuring 30 life-size moving dinosaurs including triceratops, velociraptor, T-Rex, stegosaurus and more, it’s an exciting adventure for everyone to explore! 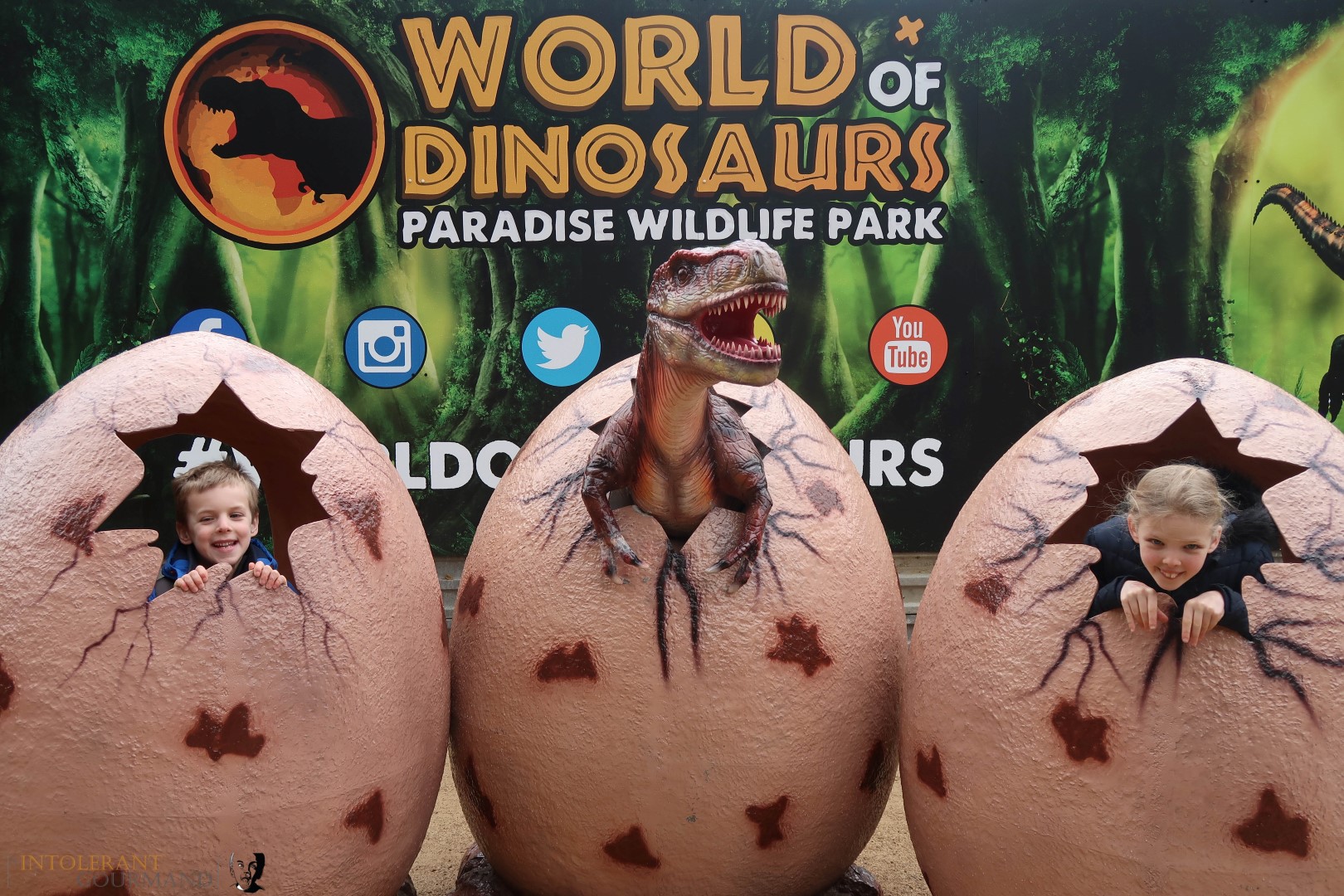 A couple of weeks ago, we had the pleasure of visiting the new World of Dinosaurs at Paradise Wildlife Park.

It’s been a tough few months with Callum and his ongoing issues, so when we were asked to visit the new World of Dinosaurs to see what we thought, we jumped at the chance. Callum spent the day before in hospital for a baked egg challenge, so it was great to have something for him to look forward to.

We were worried about the weather in the run up to the day, and as it happened, luck was not on our side. It started off dry, but within a couple of hours, heavy rain had set in. But, it’s such a great place, we didn’t mind and spent a considerable amount of time exploring in the pouring rain!

Paradise Wildlife Park, in Broxbourne Hertfordshire is a family run animal park and is home to over 500 animals including paddock and farmyard animals, small mammals, primates, reptiles, birds, and big cats. Not only can you visit for the day, you can also experience jungle sleepovers, become a zookeeper for the day, feed the tigers and so much more.

Their newest attraction, which has just opened for this summer is the World of Dinosaurs. It’s one of the biggest dinosaur attractions in the UK and doesn’t disappoint.

With 30 life-size moving dinosaurs including triceratops, velociraptor, T-Rex, stegosaurus and more, the enclosure comes complete with sound, and a treasure hunt for the whole family to complete. It’s an exciting adventure for everyone to explore.

As soon as we arrived, the children were desperate to explore the World of Dinosaurs before anything else. 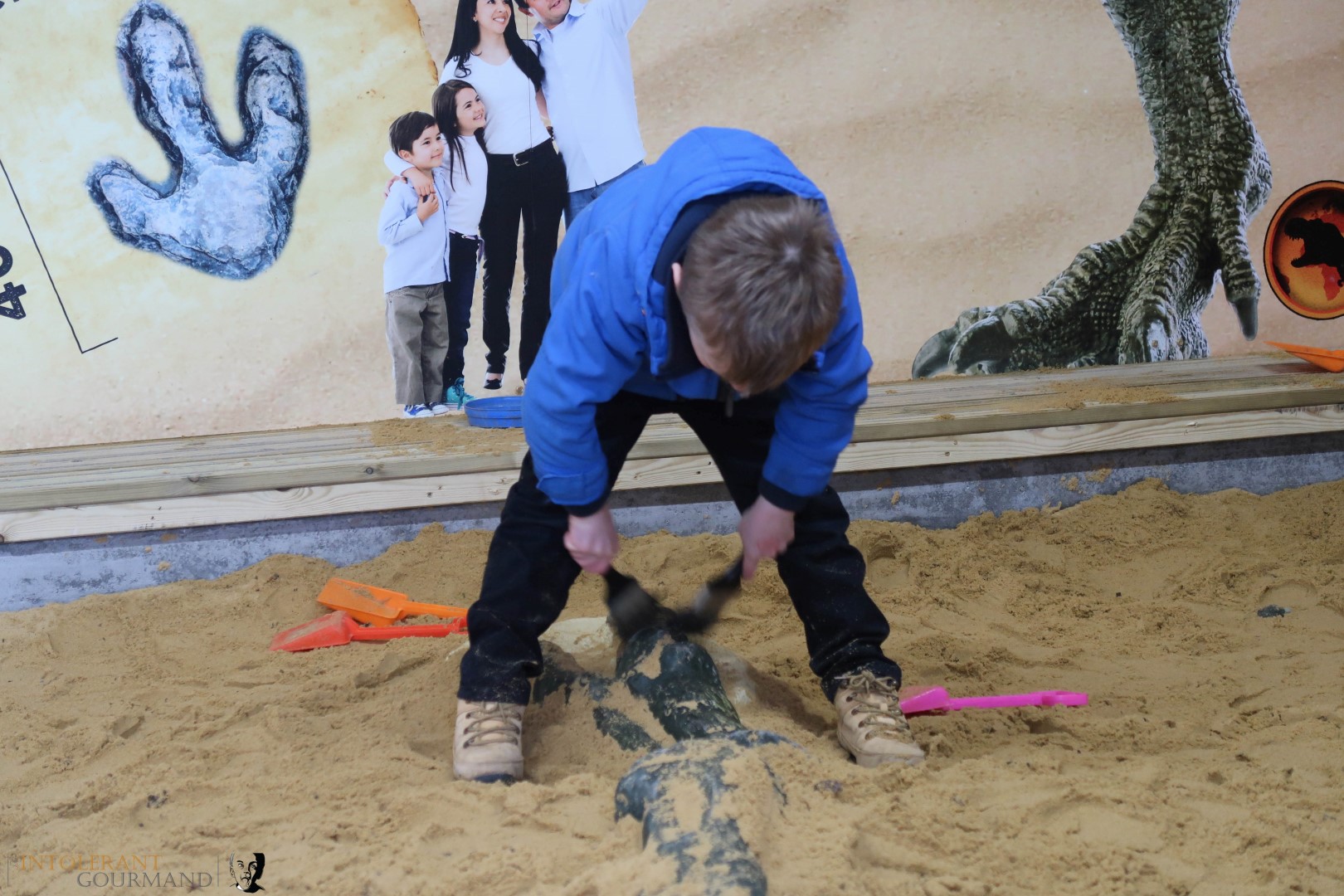 They quickly found the dino dig, which kept them occupied for enough time for us to buy a coffee in the café next door. I was really pleased to see that they stocked allergy safe ice lollies and were able to cater for gluten free too. There were allergy safe crisps, snacks and drinks, which is great to see!

With coffee in hand, we then proceeded to check out the dinosaur enclosure.

The attention to detail is impressive, with a lot of care taken to mimic the natural habitat and behaviours. When you visit, pay close attention to the T-Rex, you’ll see the ribs moving up and down when it ‘breathes’. 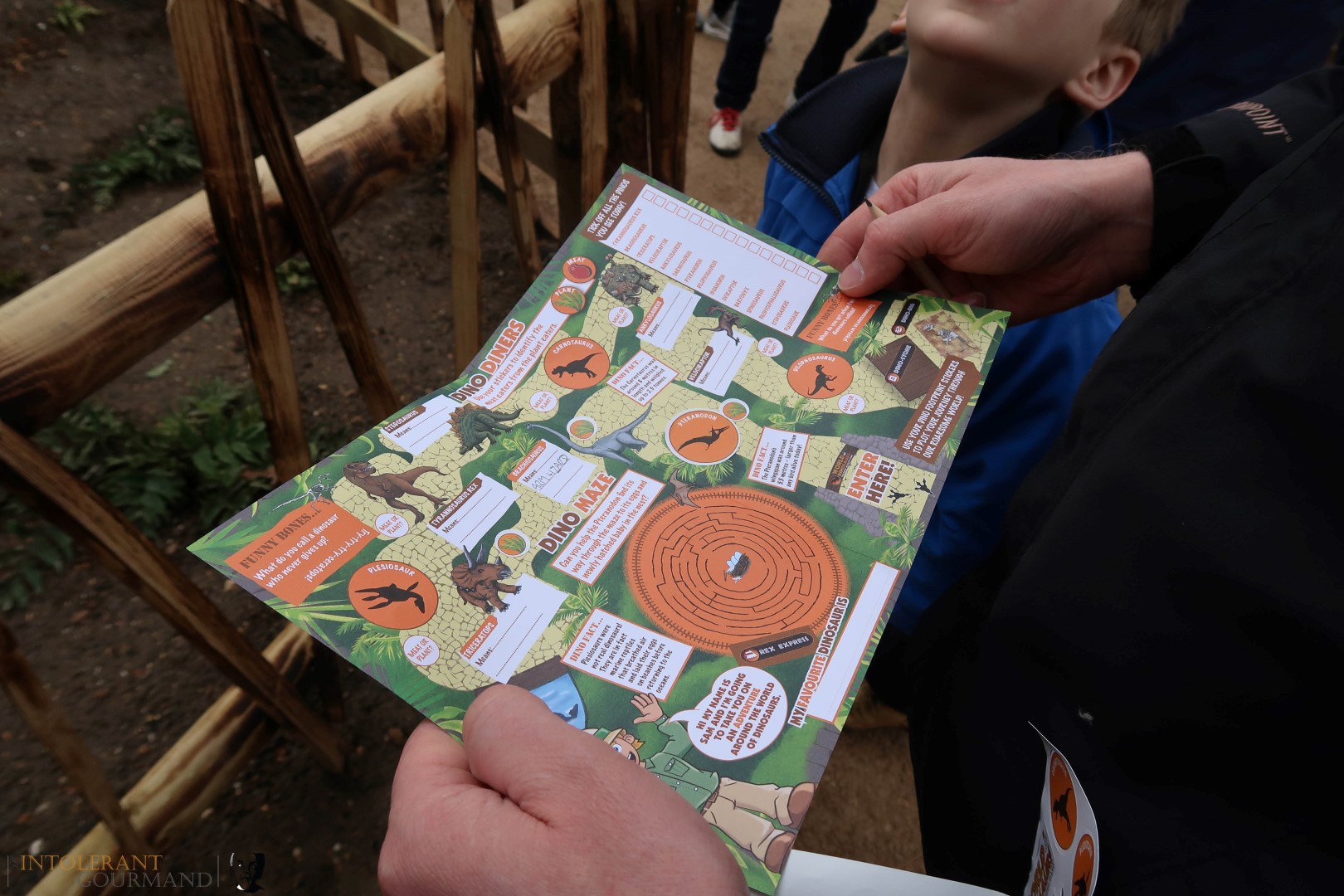 We particularly liked the treasure hunt, as not only did it encourage the kids to look at each dinosaur, it also was educational, teaching them which dinosaurs were herbivores, which were carnivores, how large or small they were, whether they lived in packs or groups, their identifiable features and more.

It would make for a fantastic school trip!

At the end of the treasure hunt, you hand in your answers to the customer service desk back at the café in return for a prize of sweets which the kids were very pleased with. 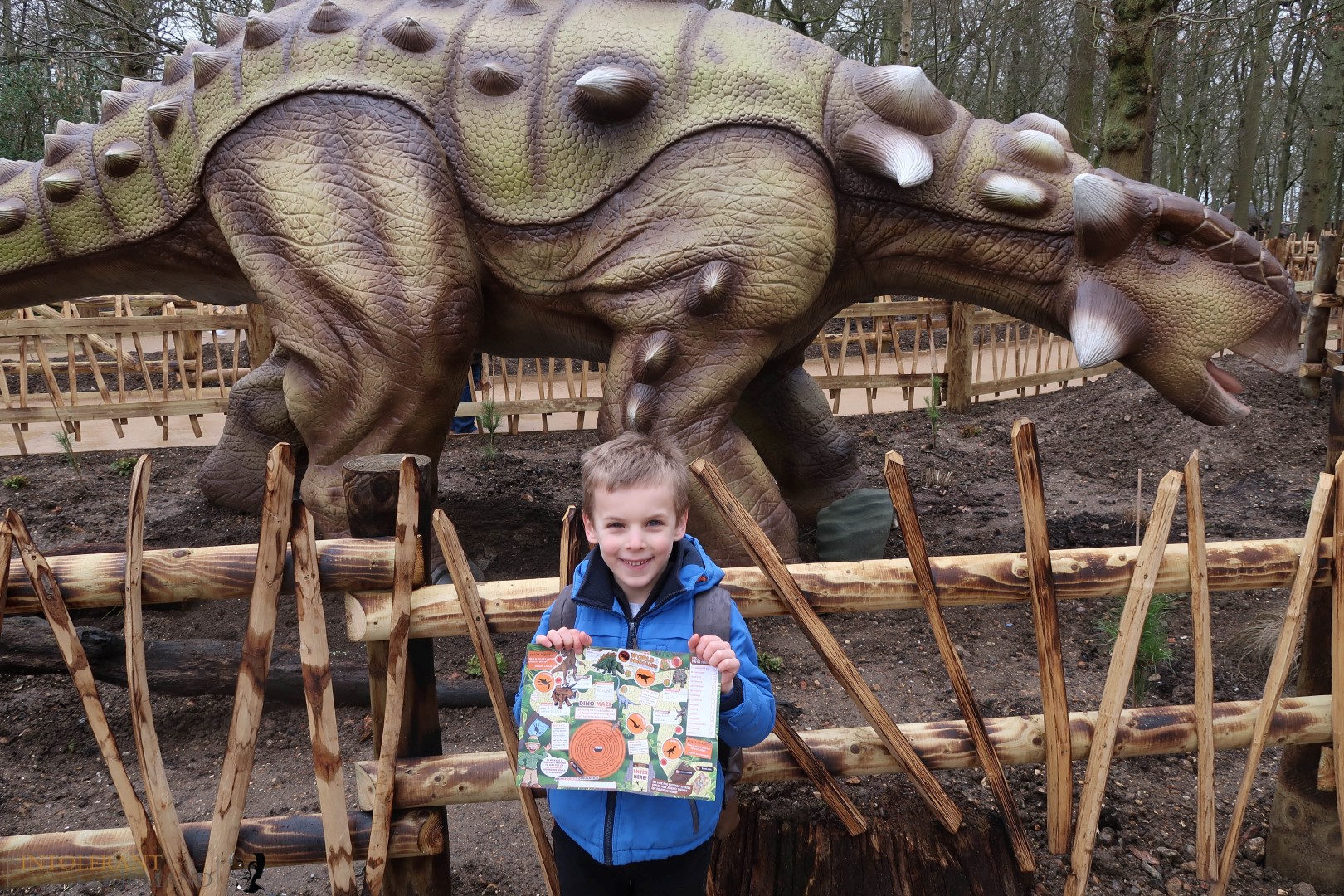 By this point it was time for a quick toilet break. And I have to mention that again, the attention to detail is impressive! It’s a place geared for family days out, and they’ve clearly thought about it. Certainly in every ladies toilet that I went into, they had built in toddler toilet seats within the main seat, and a smaller lower sink for washing hands. It’s little things like this that really help to make a day out with young children run more smoothly!

Braving the weather, we sat on a picnic bench, and ate our picnic. There were places we could have bought food, but due to Callum’s allergies, we always find it easier to bring our own food so we can be guaranteed that we can feed him with ease. 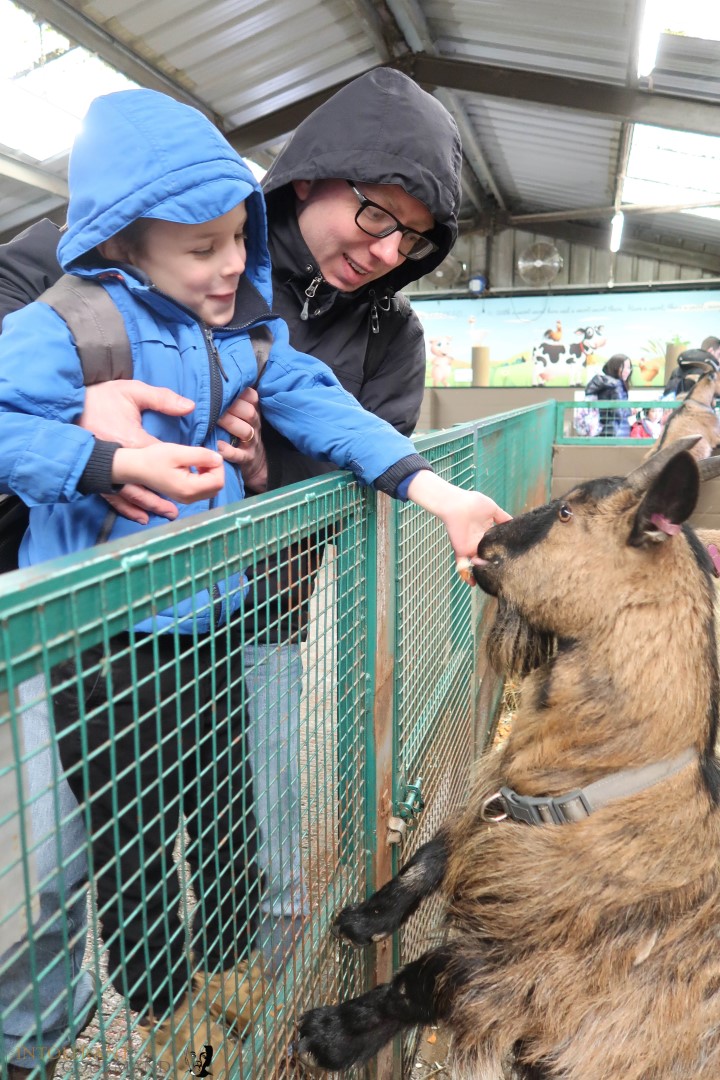 We then went on to check out the animal park, where we all had much fun feeding the animals. For those with allergies, this is another huge plus point. The food for the animals is £1 a bag, and amazingly, it is allergy safe as it’s chopped up cabbage and carrot! Callum was so happy to be able to join in!

Unfortunately at this point the weather beat us, and soaked to the skin we had to admit defeat and head home which was such a shame.

Overall, we were incredibly impressed with all aspects of the park. The World of Dinosaurs is absolutely fantastic, and we will definitely be back to explore again with family! The rest of the park is equally as impressive, and we will be sure to choose a warm and sunny day, so we can continue to explore the areas we didn’t see this time round. 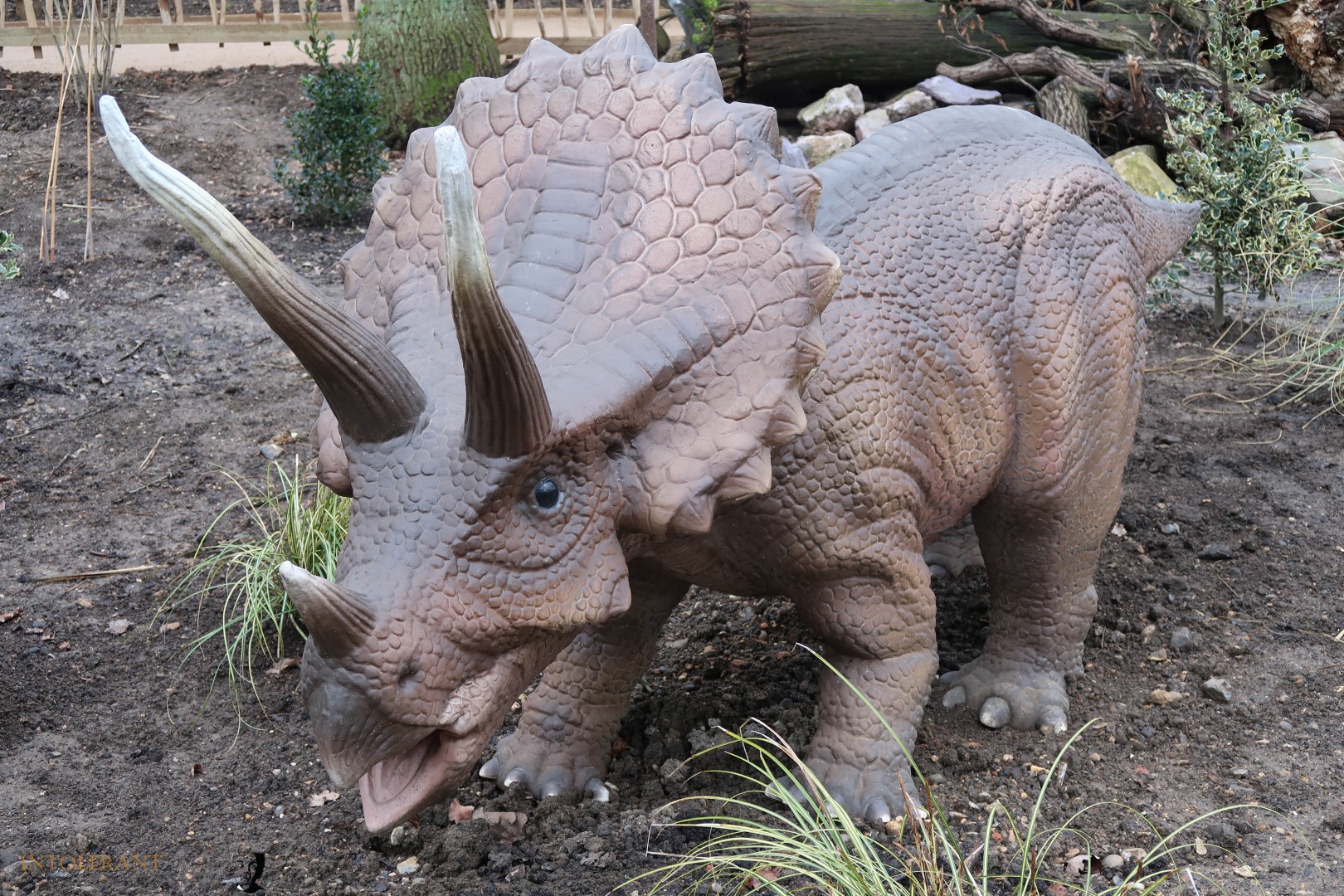 On the way home I asked for feedback from everyone and here’s what they had to say:

Pretty good place, it’s similar to Drucillas on the south coast, and there’s plenty to do! The World of Dinosaurs was very good, and really well thought out! It’s got a good trail that kept the kids entertained! (Jon)

The dinosaurs were so cool, I want to go and see them again! I liked seeing them move. The quiz was good fun too, daddy helped me, and we got a prize for finishing it! (Callum)

If you want to go and see World of Dinosaurs for yourself, then check out all the details at https://www.pwpark.com/animals/dinosaurs 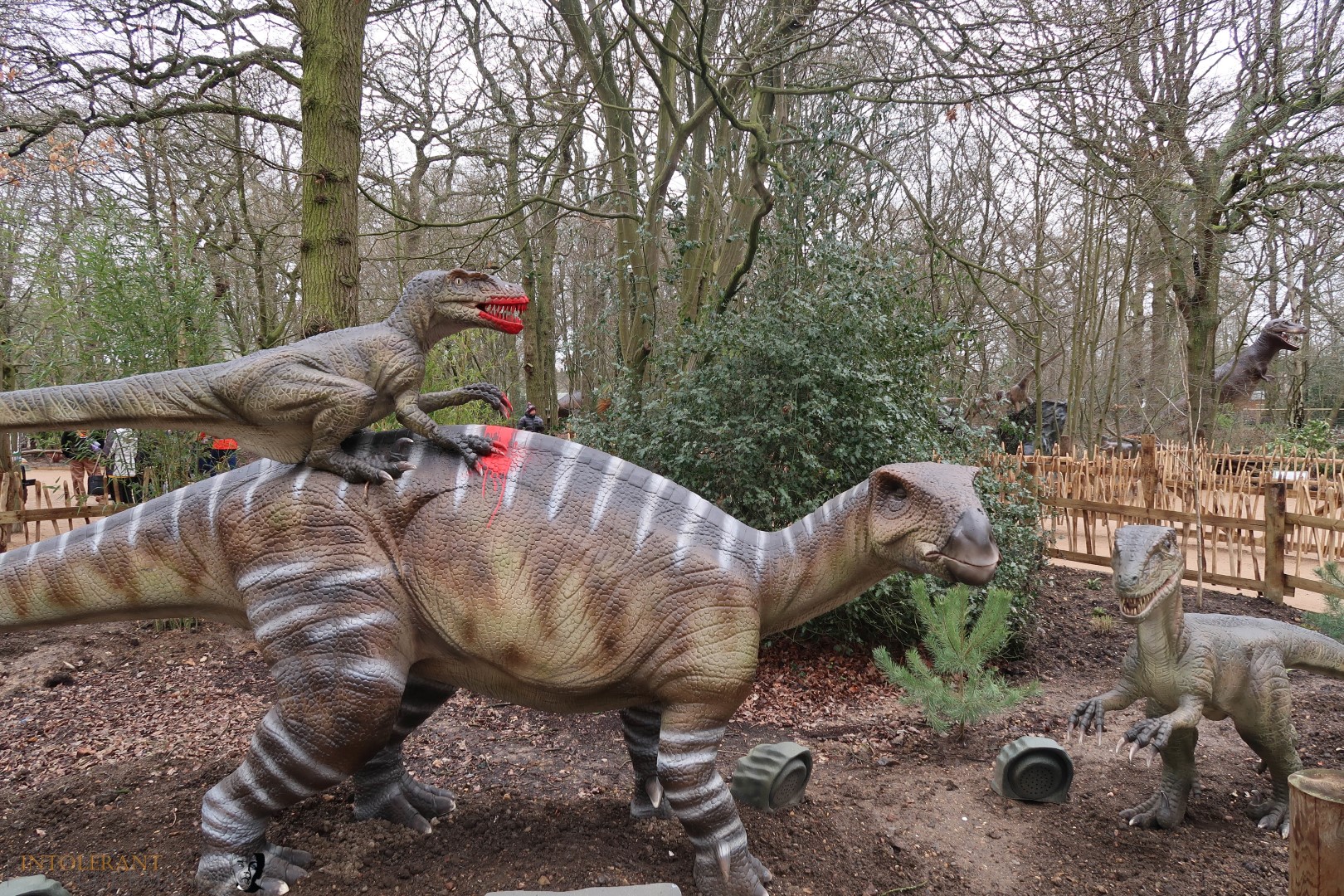 (NB: We were given press tickets in return for an honest review)